Editing the GameFlow and Movies

by Ed Benowitz
since 1.5 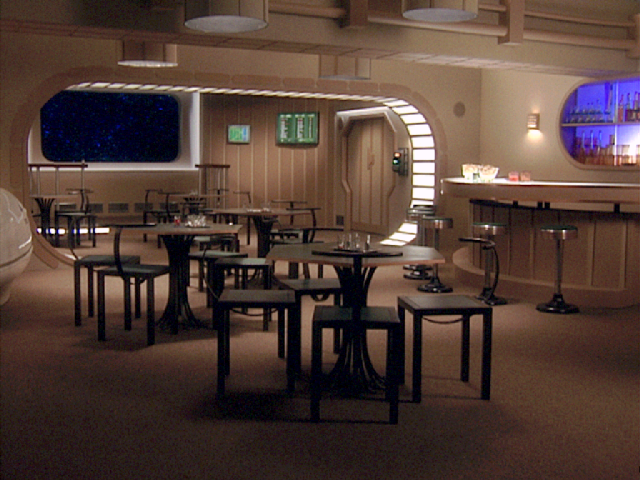 Above, we see one particular room in the gameflow.   You can customize the appearance of every room, and add as many rooms as you want.

Each room has a number of places that a player can click.  We call these "hotspots".  When the mouse hovers over a hotspot, some text will be displayed.  Hotspots can be used to perform many actions:
Additionally, some hotspots can display an animation.  An animation is a series of images, displayed on top of the background.  The doors that open as you move the mouse over them are an animation.

Additionally, music and sound play in the background.

The first place to start is gameflow.xml.  Open up this file in an xml or text editor and follow along.   First, I'll post a simplified version of gameflow.xml that covers the structure

The gameflow consists of many rooms, followed by paneltext, followed by music.   Each room can contain many hotspots.  We'll cover the rooms later, but first, let's hit a few easy topics first.

In the main gameflow, there are actually 2 music files playing simultaneously.
Additionally, a different music file plays during a debriefing, and this is also controlled in the gameflow.xml file.  For a winning mission, the sound specified by debriefing_good_music will be played.  On a losing mission, debriefing_bad_music will play.

Remember, you can add as many rooms as you like.  A room itself consists of many hotspots, and a background image.
The background image should originally be sized 640x480.  Keep a backup of the original image, we'll need it later.  Keeping the original image in the lower left hand corner, you'll need to put empty space around the right and top of the image, so that it's new size is 1024x512.  This is because OpenGl requires images to be sized to a power of 2.  Do not stretch the original image as you do this resize.

We'll first start off with a simple hotspot
mouseovertext:  This optional attribute specifies the text that will be displayed when the player moves his/her mouse over the hotspot.

command:   The id attribute identifies what happens when the area within the hotspot is clicked.  It can be one of the following values:
<command id="changeroom" param="1"/> Now we'll move on to a more complicated hotspot
This hotspot is a door.  When the player moves the mouse over the hotspot, the sound "door.wav" is played, because of the sound attribute.
Additionally, note the animation parameter.  This is used to display an animation.   An animation is a sequence of images.

fps:  The speed at which the images change.  This is short for Frames Per Second.  8 is a reasonable number.

x and y: Refer to where to place the lower left hand corner of the animation.  It may take some trial and error to get the position correct.

Note that all animation images, must be .png files with alpha channels.  They must be a power of  2 in width and height, but you can use the alpha channel to exclude any extra parts around the top and right.

You can now play movies, and even choose which  movies to play for each mission.
The following diagram shows the various phases of the game. 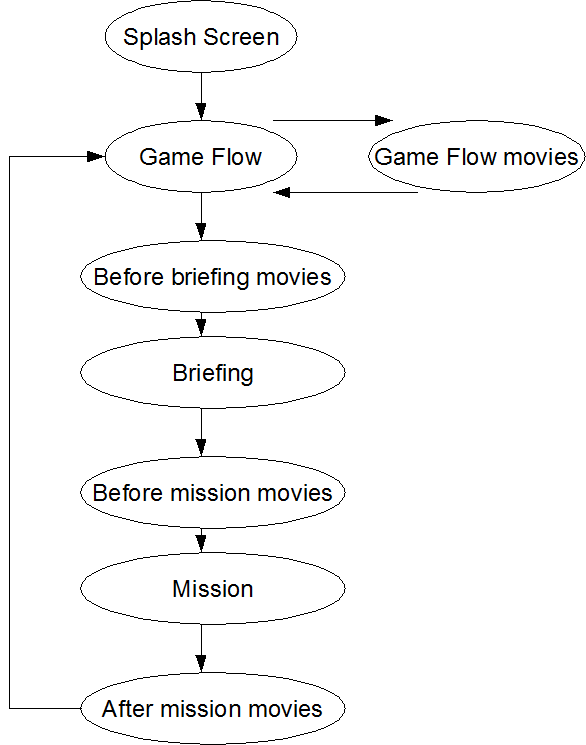 From the diagram, we can see four places to play movies:
Now, most customization will involve lua scripting.  All Flight Commander scripts are done in the Lua scripting language. The book Programming in Lua is a good introduction.  Note that when editing outside of a mission, only certain functions are available.

To customize the movies for a particular mission, you need to create a file mission_name.gameflow.lua.  For example, if your mission is named A1.mission.xml, your new gameflow script file must be named A1.gameflow.lua.


You'll always want these to be the first 2 lines of your script:

Then, you must define at least the following four functions, even if they are empty.


Startup is called whenever you start a new mission.  Within startup, you can call any of the following
In the next series of functions, you're allowed to play movies.  You can choose which movies to play based on saved variables for example, which are available for your use.

beforeBriefing and beforeMission behave similarly.  You can add as many movies as you want to these functions by calling
You can also add movies to AfterMission.  In addition, to saved variables, aftermission has access to serveral variables from the mission that just completed.
You could use these variables, for example, to choose which movie to play.  These variables are
and are documented in the gameflow scripting reference.

Besides playing movies before briefings and before and after missions, we can show players some movies in the middle of the gameflow. These movies are played when the player clicks on a hotspot.

For example in this hotspot

note that  the command is playmovie.  When you specify playmovie, param is the name of the script function that will be called.  Make sure to place this script function in your mission.gameflow.lua file.  For example, in this case we add
to play Stiletto's movie at the right time.

Where moviefilename is an avi file and mp3filename is the name of an mp3 file.

Adds a fullscreen movie.  Can be called in any gameflow script function except startup.

Where room is a room within gameflow.xml.

This is used to start off a particular mission in a different room.  This is useful for changing the room background to add an additional hotspot for a character conversation.  The first room in gameflow.xml is 0.  This function can only be used within startup function.

Where mp3filename is the name of an mp3 sound file.

During the gameflow, a background voice is played.  The sound can be changed by calling this function.  This can only be called in the startup function.  This is useful if, for example, you'd like to play a scramble voice in the background for certain missions.

Since 1.5
This variable is only valid within  an afterMission function.  The variable can have one of the following predefinted values.
Example: