When Flight Commander first begins, you will be taken to the main menu. 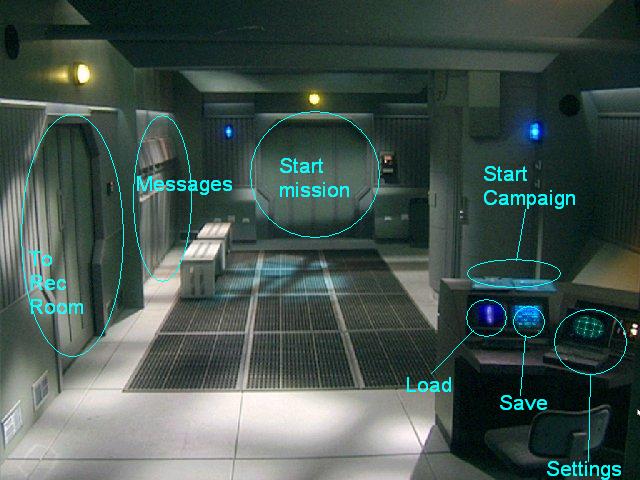 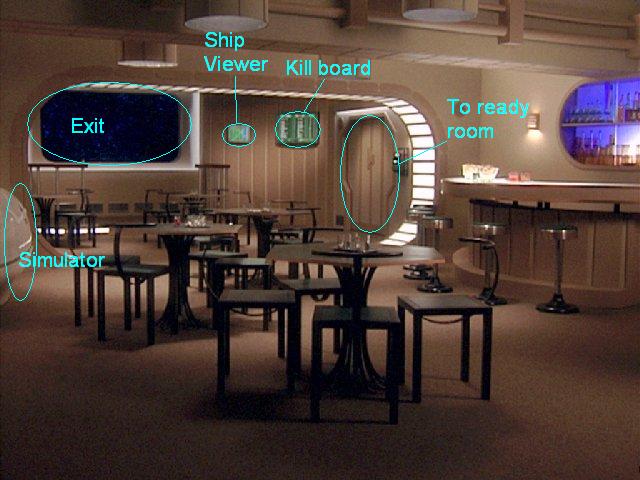 For your first mission, click on the campaign button.  Select a campaign, and then press the ok button.  You are now back at the main menu.  At this point, you can click on the start mission button.

You will see a takeoff sequence, after which you will be able to pilot your ship.  First practice steering, with either the arrow keys or a joystick.  Now practice firing guns, with the space bar.  To change guns, press the g key.  Press g until you have selected full guns.

Examine the bottom of your screen.

On the left side, you see information about the currently targeted enemy.  To change targets, press t.  You will likely want to press L to lock on a particular target, since some missile can only fire at locked targets.  The blue shields recharge with time, but the inner red armor cannot recharge.  Once all shields and armor are destroyed, the enemy ship will explode.  At the same time, you want to protect your own ship.  Firing guns, by pressing space bar, reduces energy.  However, this energy will recharge over time if a gun is not fired.

To spot spacecraft, look to the map at center, consisting of three concentric circles.  Dots appearing in the center circle represent ships in front of you.  Try to force red enemy ships towards this center circle.  The middle circle is divided into four quadrants.  The top section shows ships above you.  The left section shows ships to your left.  The final, outer circle displays ships behind you.  Red dots represent enemies, blue dots represent friendly spacecraft.  You current target has the largest dot.

Now that you are familiar with controls, it's time for combat.  As long as there are no enemies present at your current location, the autopilot light will appear.

Whenever this indicator appears, you should press the 'a' key to proceed to the next nav point.


After pressing the 'a' key, enemies will begin to attack you.  First, you should press 'c', followed by 1 to instruct your wingman to break and attack.  You can issue other orders as well from the comm menu.  Now,  increase your speed to maximum, and face towards your target.  Do this by moving so that the target is in the center of your map.  At this point, the target will appear onscreen. When your crosshairs are close to the target, fire by pressing the space bar or joystick button 1.  If you have lock onto the target by pressing 'L', you can wait for  a missile lock.  When you have achieved missile lock, arrows will appear on the outside of the target's red square, and a sound will play.  At this point you may press the enter key, or joystick button 2 to fire a missile.  To change a target, press the 't' key.  To obtain a brief burst of speed, press the tab key to afterburn.

After destroying all enemies at a given nav point, proceed to the next nav point by pressing 'a'.  At the final nav point, you can finish the mission by bumping into your carrier.  Friendly carriers  appear as light blue dots on the map.  You may want to target the carrier to find it.

Upon completing your mission, you should create a save game.  Once you are back at the main menu, click the save button.  Choose a save game slot, and then type in a name for your save game.  When you start Flight Commander the next time, instead of first choosing a campaign, you can use the load menu to continue a  a previous game.